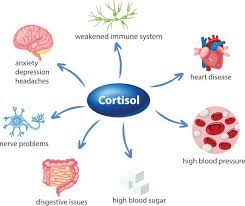 Cortisol is a hormone involved in the stress response and in emergency situations and is important for having energy that is ready to use and to reduce inflammation.

It is a life-saving hormone, but if we alter sleep, do stressful jobs, there are problems in the family, its levels can rise and with it the blood sugar level and in doing so in the long term we find ourselves bloated  overweight and diabetics

Cortisol has a circadian rhythm, is highest in the morning and progressively decreases in the evening. And this comes from the fact that blood sugar has to rise naturally in the morning. But  the nutritional question always has been? We have to reduce it by consuming carbohydrates in the morning or we have to indulge it by consuming proteins instead. The answer depends on what type of person you are, what your goals are and what effects stress and cortisol have on you.

Every person needs the right setting. The truth is always in the middle. For some it is important to take carbohydrates to dampen the effects of cortisol which is high, but only of whole nature to avoid glycemic fluctuations, for others it is not and it is important to reduce them.

A protein and fat meal stimulates cortisol which is therefore not good for people who are not overweight, but who already suffer from stress and sleep disturbances. On the other hand, those who produce little of it must have a mixed meal of proteins and carbohydrates. In fact, following a high-protein diet could worsen the situation in the long term and stimulate the hypothalamus, pituitary and adrenal axis too much and favor a greater production of cortisol in people who require carbohydrates, vice versa it could be useful for people who already have insulin resistance.

Pollution and the effect of our actions